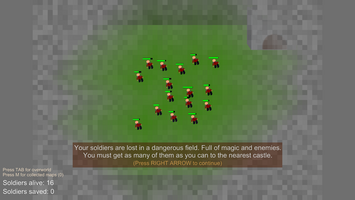 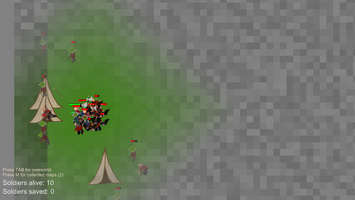 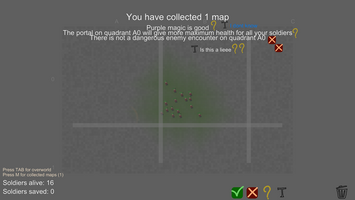 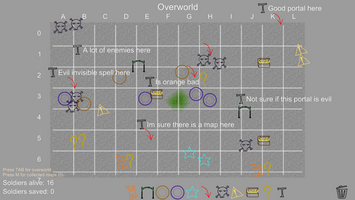 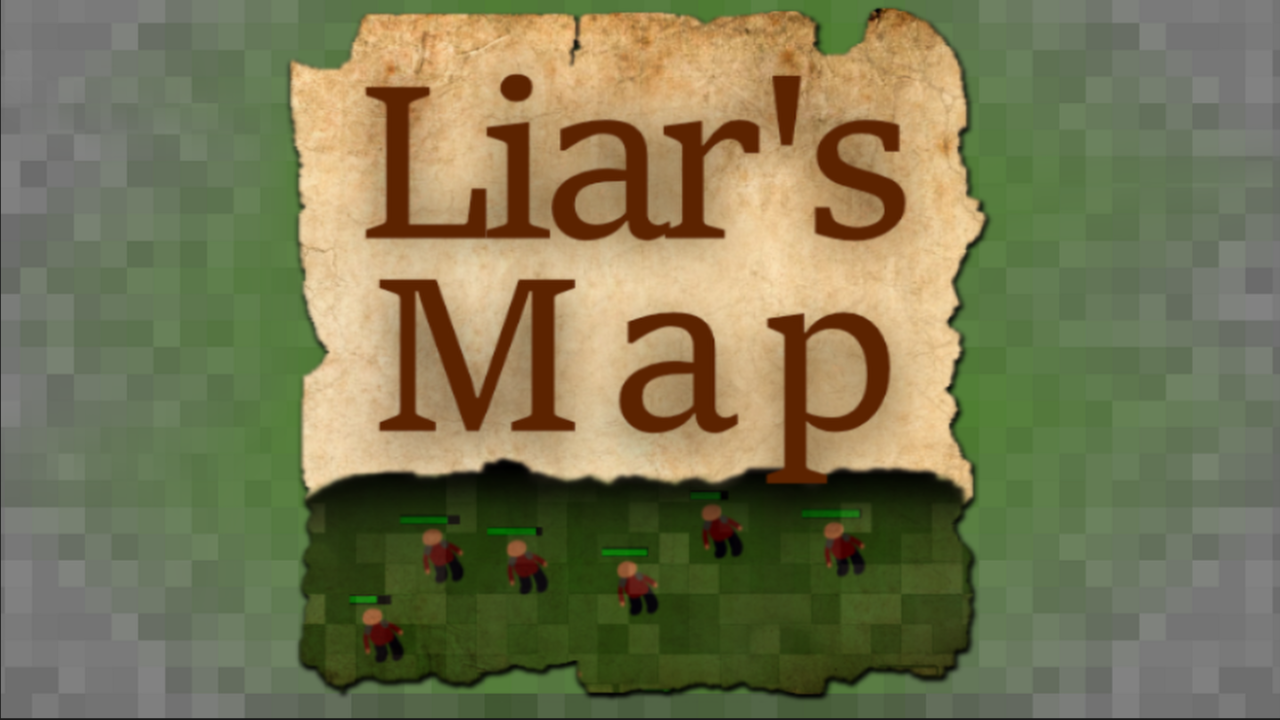 Welcome to the making of Liar's Map. My submission to the 2019 Community Game Jam - with the theme: The Game is a Liar.

Making a game in 7 days is a great way to live through all the major points in the process of game development: all the ups and downs, all the happiness and sadness, all the confidence and all the doubts. It's a real test of determination to achieve a big goal and, hopefully, succeeding in the end. Going through all those different intense experiences is why I love making games, so I thought that today I would share with you the process of creating this game, because it so nicely encapsulates the whole ride, even if just for seven days.

The game I created is called Liar's Map.

Liar's Map is an RTS game where you are a medieval lord and your soldiers are lost in a randomly generated meadow.
You must must help them get to the nearest castle while avoiding monsters, magic and worse.
All you have at your disposal are maps left by other travelers.
However each map has one true information and two lies.
Will you be able to traverse this dangerous world and get your troops to safety? 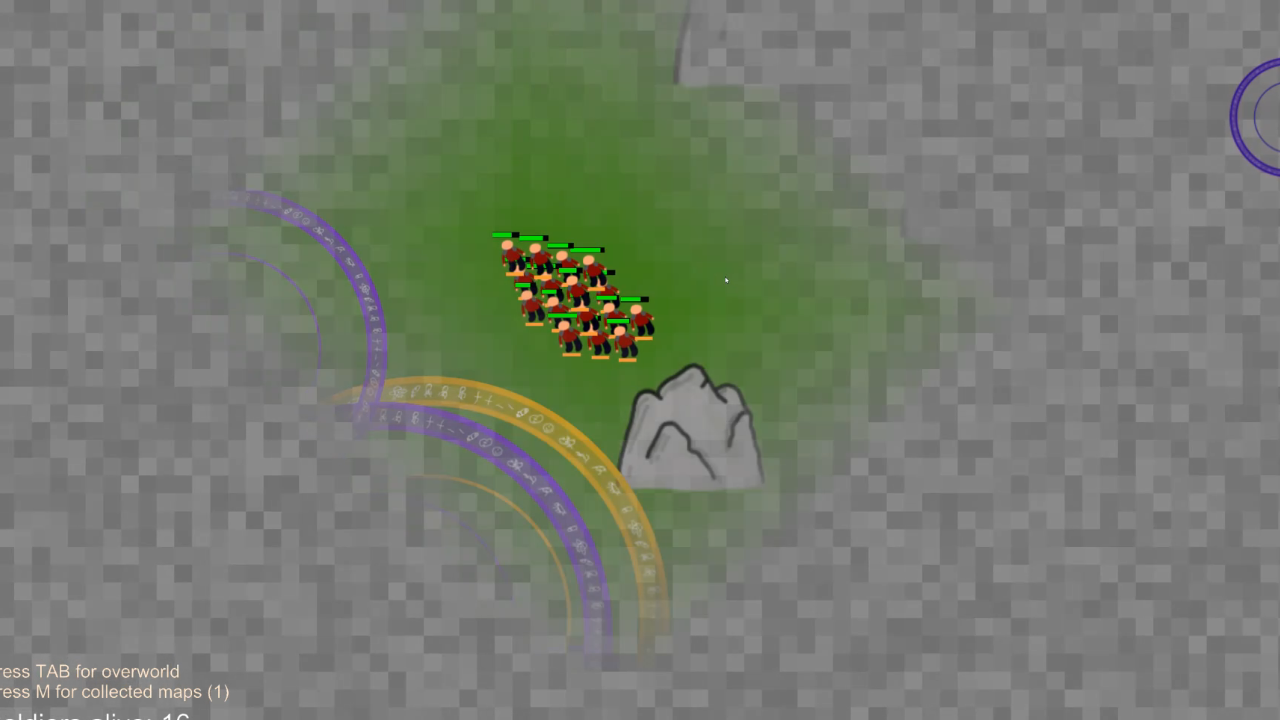 Watcher the Trailer + Making Of

I created this game in seven days. I was alone in the project, so I had to make everything myself, from the programming, to the art and even the music. To add to the challenge, I programmed it in the C programming language with no engines.

I will break down the progress, struggles and successes for each day so you can see how the game was made.
So bucle up, because we are going on a game making adventure. 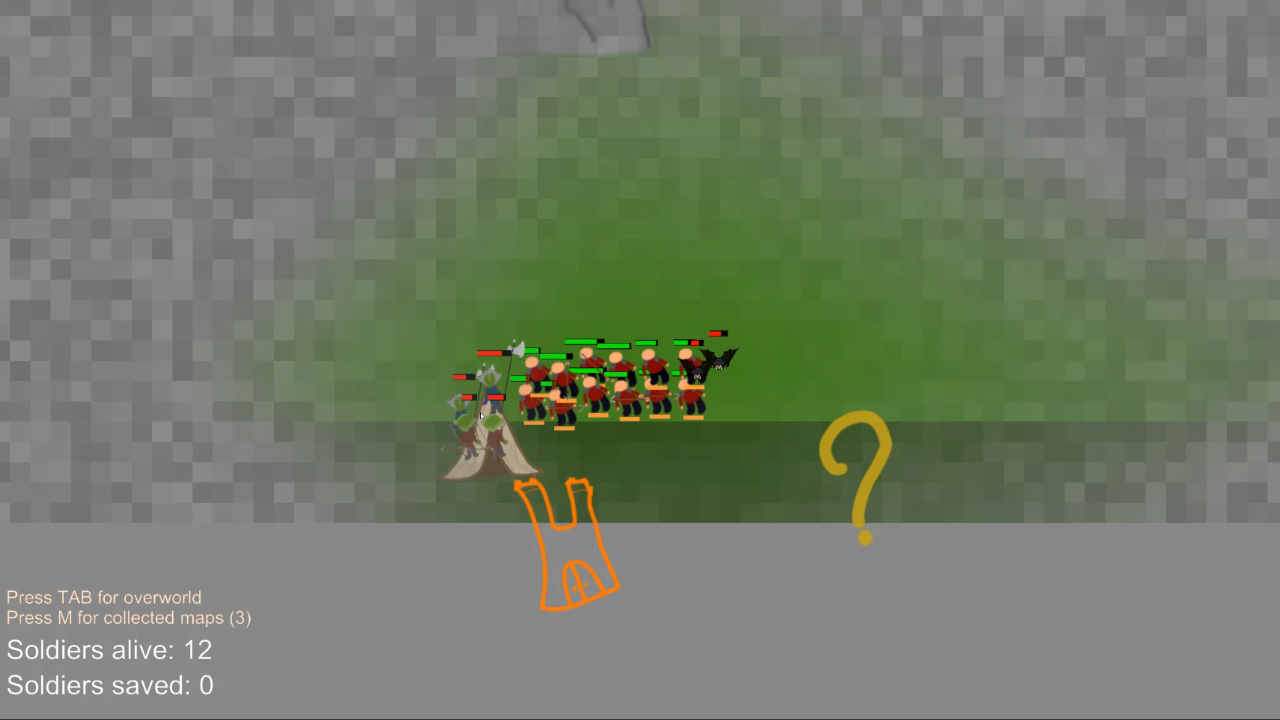 Day One: Saturday - So many possibilities

As soon as the theme was announced, I started thinking about game ideas. The first few ideas are probably what everyone's else is going to think as well, so I just scrap them. But it's they're necessary to get to the more interesting stuff. 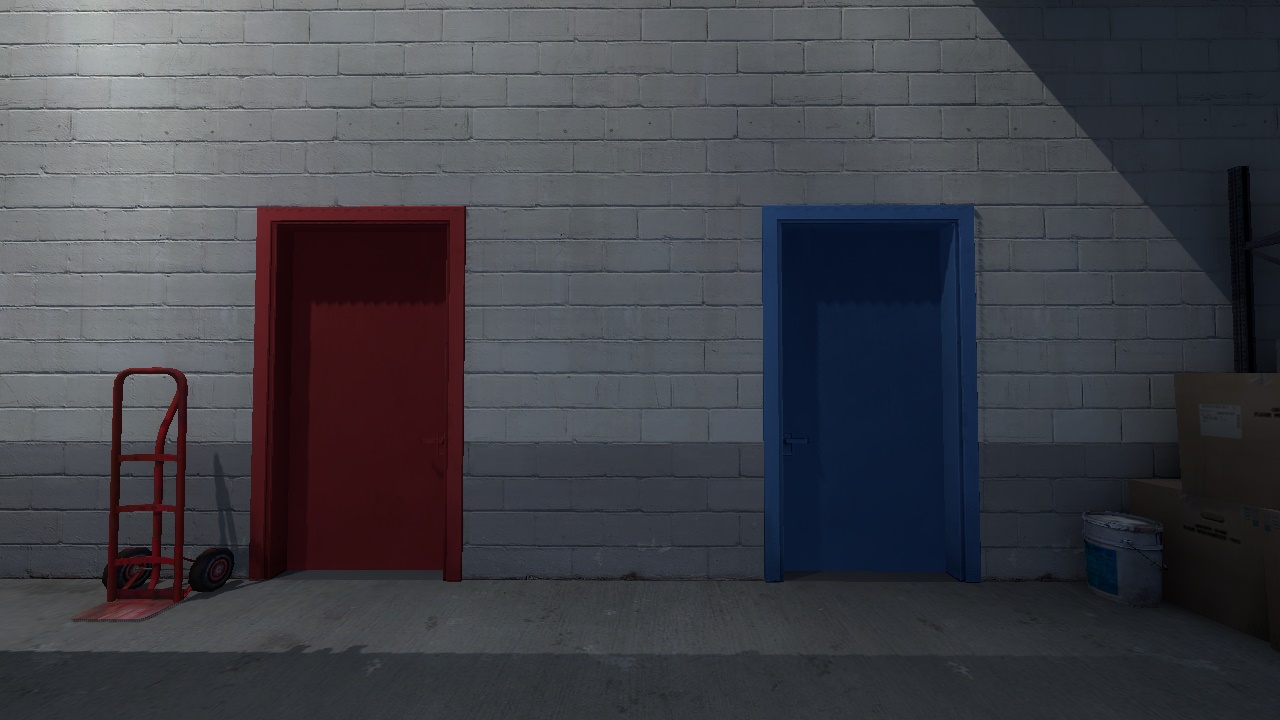 The first thing that came to mind was The Stanley Parable and Portal. With their unreliable narrators. 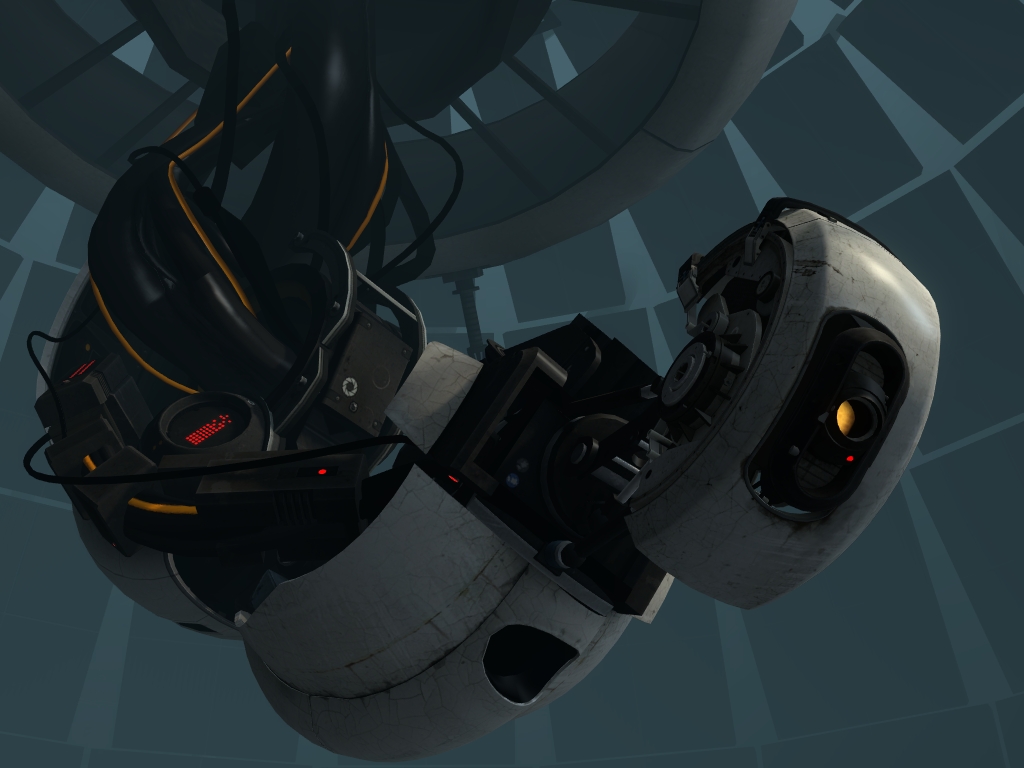 I first typed some stuff that came to mind, but then let my subconscious work on that a bit, while I programmed the game engine.

I first typed the code to make a window, render rectangles, bitmaps and colors. 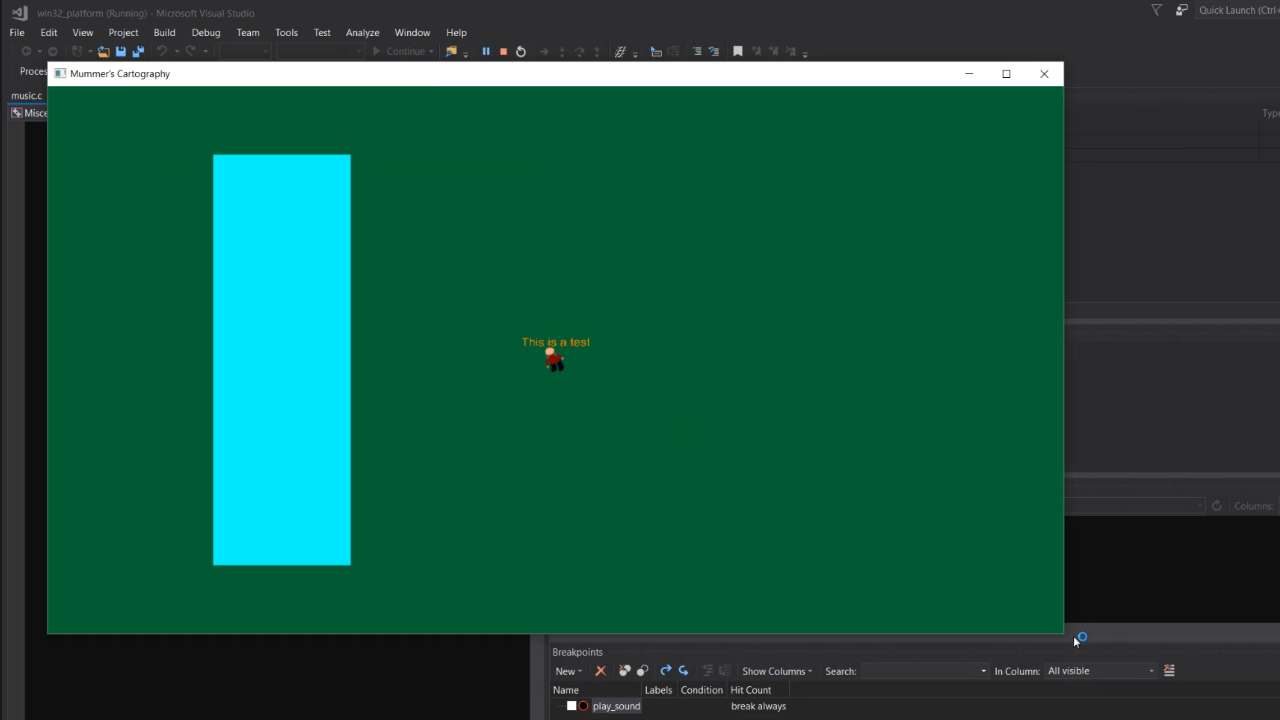 And whenever I had an idea, I stopped and typed that on the file.

I also worked on the audio system to allow me to play music and sounds.
At the end of the first day, I had the first version of the engine that would allow me to start working on the gameplay code. 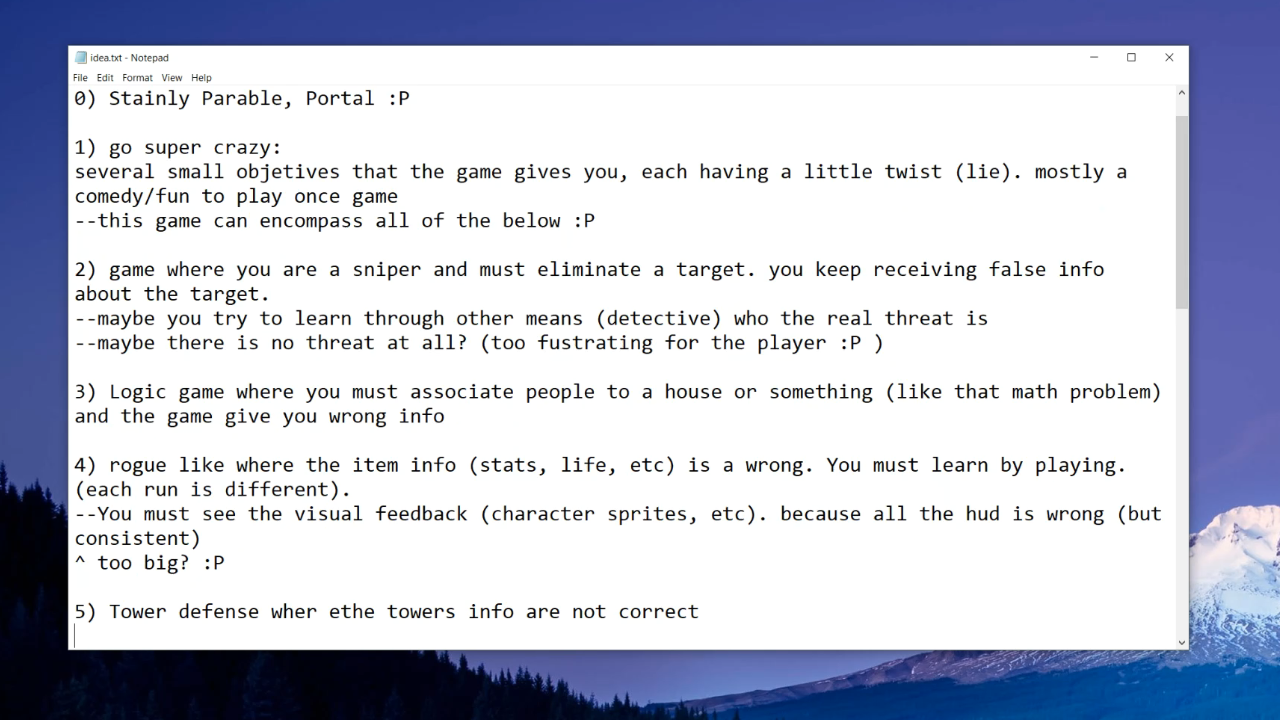 I had a total of 7 game ideas, and there was one that I really enjoyed. It started as an abstract idea of the game happening and you not seeing it, but interfacing with it through an unreliable character. As I developed the idea, I decided that the game would be an RTS where you would have to build the knowledge of the map with uncertain information, while making notes of the things you found to be true.

Since everybody knew that the game would lie (it was the theme, after all...) I thought: what if it only lies sometimes and the true information it gives was vital for your victory? Now that would make an interesting game!

So the basic idea is: you have limited access to the game's information (the complete map) and the interface you have to use to get more information is not completely reliable (maps) but must be used to reach the goal (castle)! 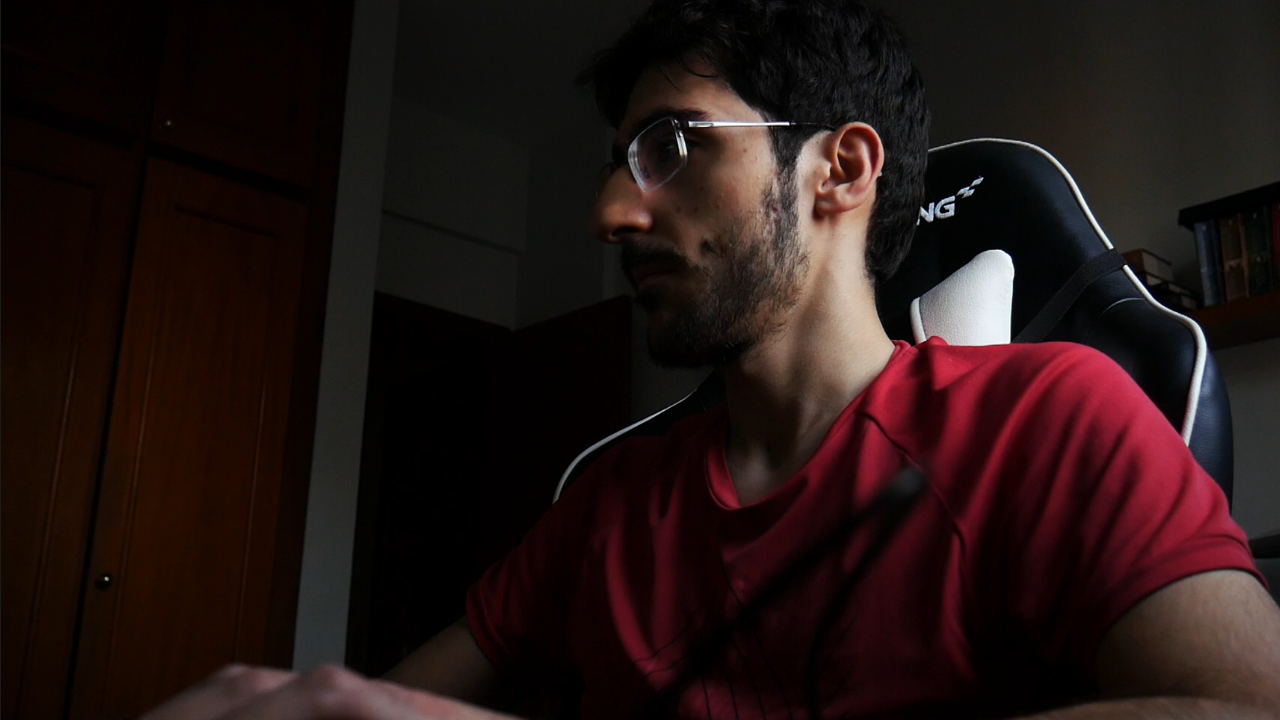 I started the day by planning each following day, dividing the game into manageable parts that would be implemented, while still leaving room for changes and mistakes. Because plans change all the time!

I quickly created a character to use and worked on the basic movement system and win condition. And then started working on the fog of war.
I never created a fog of war before, but knew that it was usually done by rendering a mask to an invisible texture and combining that with the main game view. However that would require me to work a lot on graphics, something I'm not very familiar, so I decided to hack that and just draw a bunch of little squares that would be in the player's view.
It worked great, but when I made a larger map....
So I spent some time researching and optimizing the system. By making fewer calls to OpenGL I got that running nicely, at least for this version.

I then made the system to add stickers and notes to the map.
At this point I had a LOT of ideas for the game mechanics, so typed all that.
In the night, I drew and implemented the magic circle and the enemies.

That was all for Sunday. 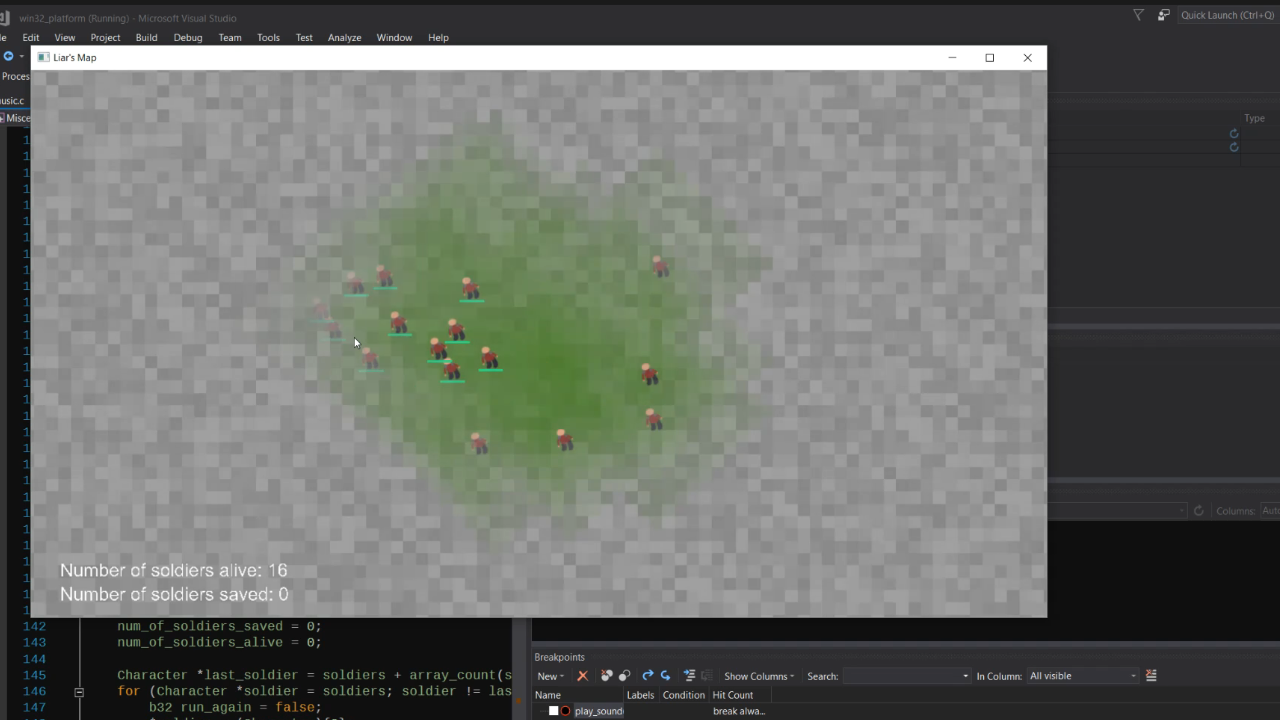 I knew the in week days I had a work a little less than the other days, so I focused on building the major systems to make the game work. Especially because this game would only make sense if every base piece was in place.

Then the map would get one statement knowing it is true, get another two statements and reverse them, so they would be false.

With that in place, I could play the game and validade some of its ideas.
I got a lot of motivation at this point and knew that what new systems game required to be more interesting.

I also spend some time hunting a weird crash bug. 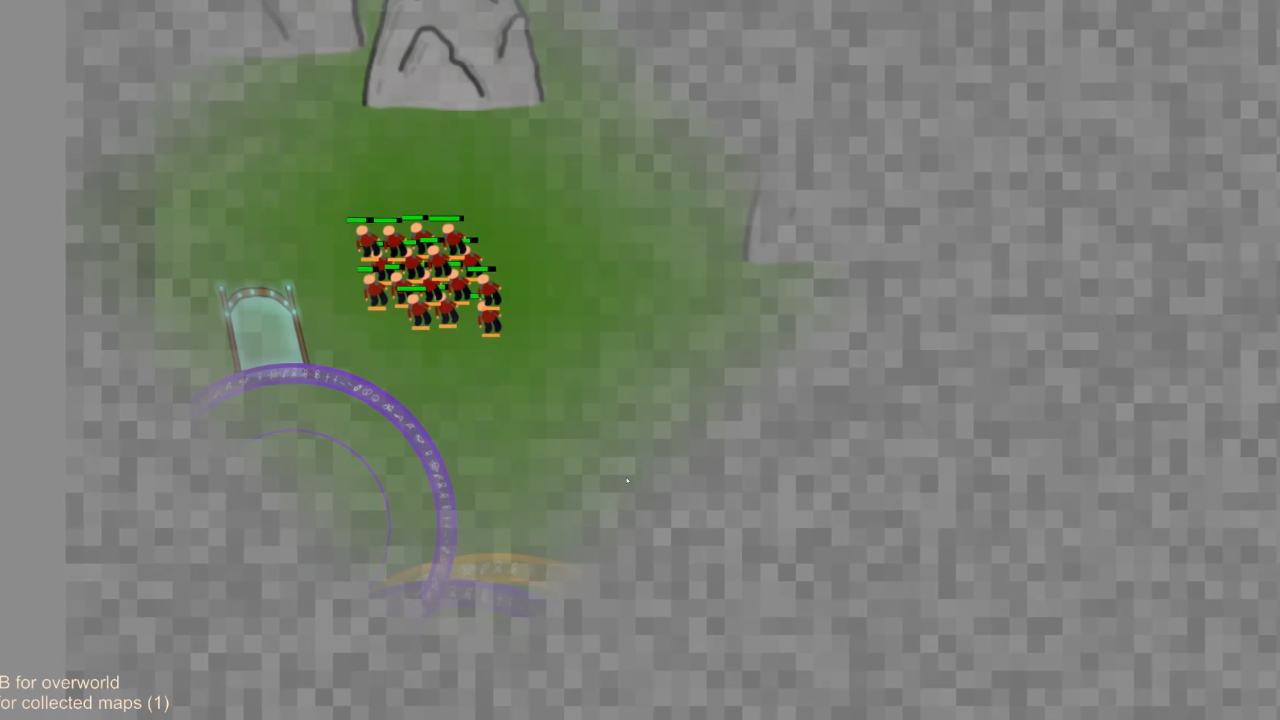 I started off by improving the statement system, so it would it would have more to say on the objects like: There is a invisible magic portal on D3.
I also added some rocks on the map to make it more interesting. I never got their collision 100% smooth though...

I added the magic portal system that I believed would be the missing piece for the game, and play tested a lot.

At this point, I lost a lot of my motivation, thinking the game was too weird and abstract.
So I quickly added a tutorial and a menu and posted the build on the Jam's Community forum to get people's feedback.

So I decided to take a break from the game's design and decided to mindlessly work on the art, but I had a music idea and started to chase that instead.

So I spent all night creating the music, which turned out to be about 11 seconds of unique stuff but with several layers to add variation and different emotions.

That was it for Tuesday.

I started the day just adding the music to the game, and making a dynamic music arrangement system.
It was a great way to add something without thinking about the game's design, that I wasn't very confident with at this point.

The game got played on the forums and I got nice compliments and suggestions. Along with hearing the music in-game (which I really liked) I got a motivation boost.
So it's very important to go through all the doubts that appear in the development - even on a small one-week development process, because at the end of the day the game just keeps improving.

I improved the points that people struggled with and added sound effects and a new enemy - as was suggested in the forums.

I finished the day feeling pretty happy with the game.

I knew these last two days I wouldn't have much time to work on the jam, so I focused on finishing it.

I playtested it a bunch, which resulted on several improvements. I also made a save game system.

The day ended with the game in it's final state! 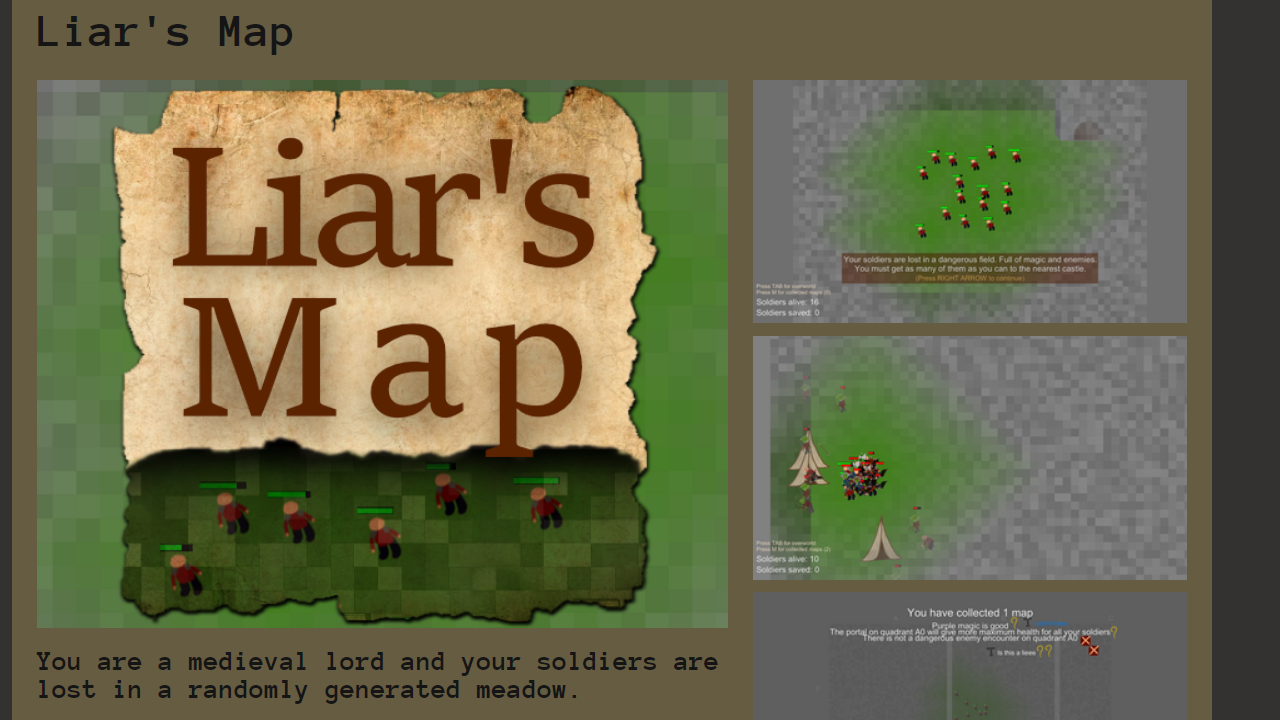 With the game done, I had to focus on it's release. I created a logo and took some screenshots. I also built the game's Itch.io page. When everything was set for release, I worked on this making of post. 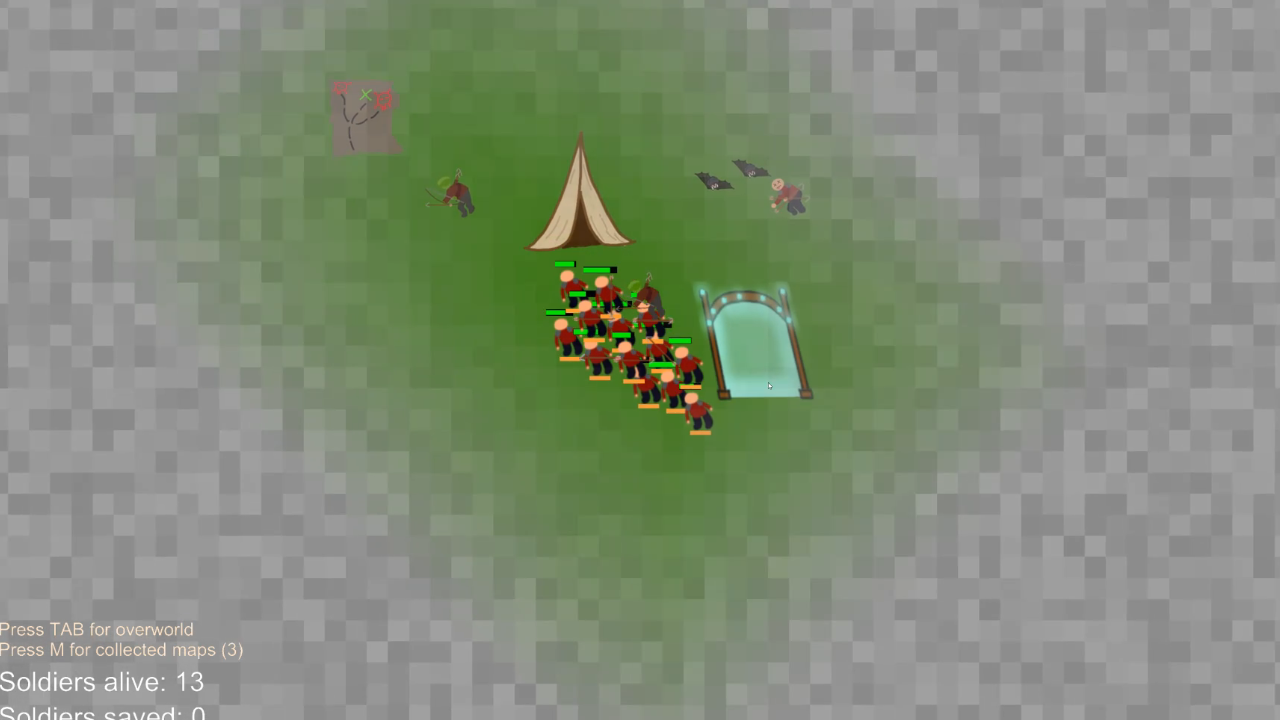 Making game jams are awesome because they encompass most of the emotions of the game development process. Everything I felt and lived through my 3.5-year long game I could have a small sample in this game jam. From the ups and downs of motivation, to the determination needed to finish. The thoughts that the game sucked and I should quit, and the thoughts that the game was awesome and I should spend more time on it. 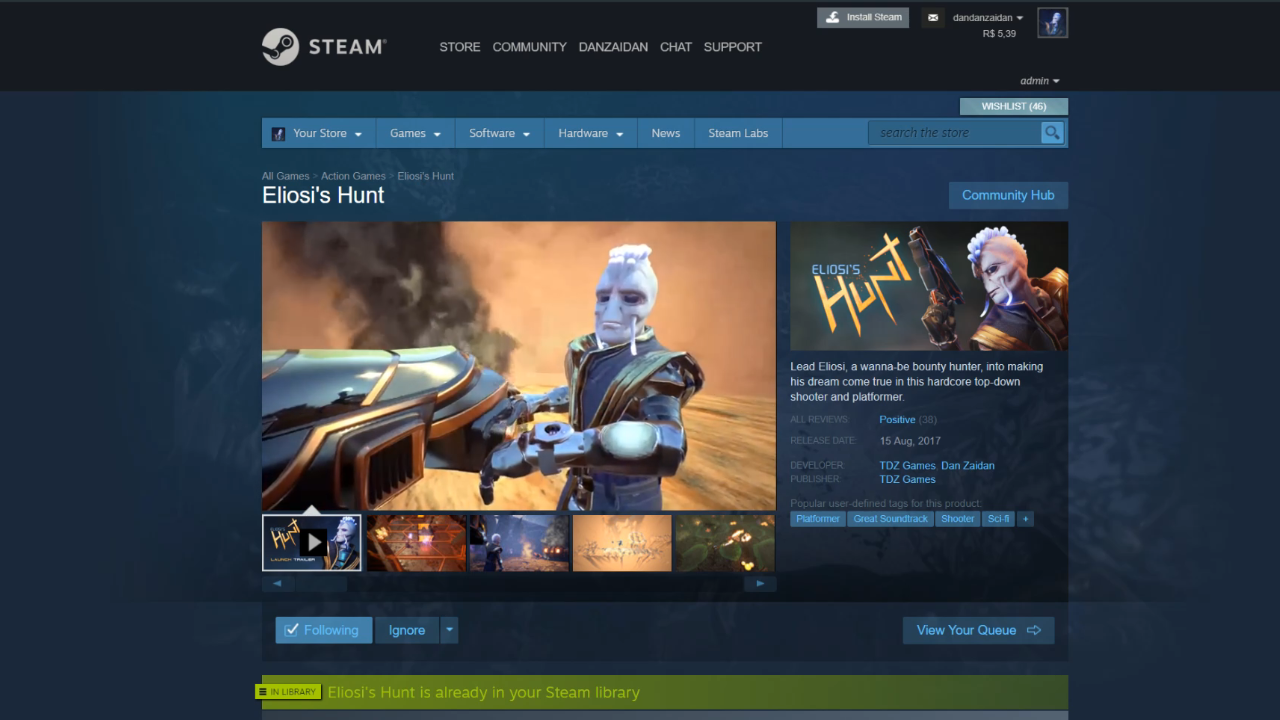 And that is a great reminder of why I love making games. To have created from nothing an entire experience, that people could interact with, share and engage; all the while going through a creator's roller coaster ride of ups and downs is an amazing experience. And I'm really glad when I find the strength to go through with 'til to the end. 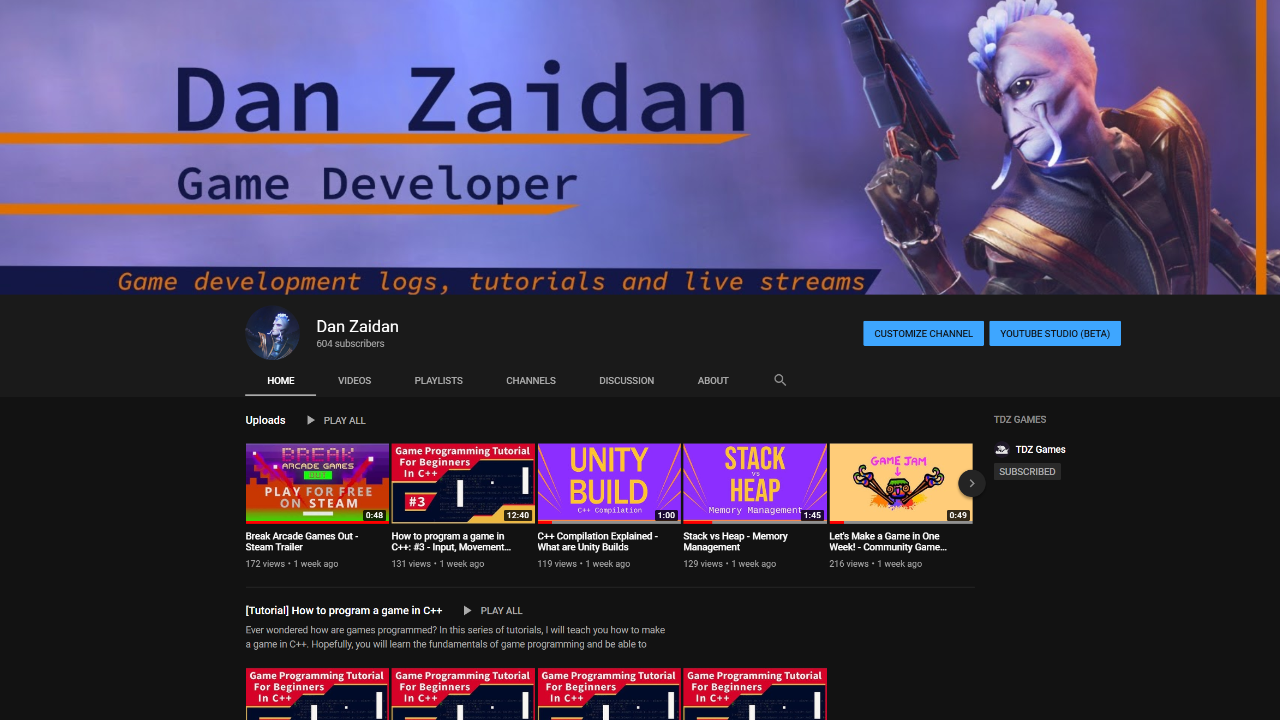 I really hoped you enjoyed this making of the game. I love sharing the passion I have for making games with you. So if you liked it, please share it with your friends. You can also check out the game on Itch.io and my videos on Youtube. I have a lot of game making tutorials to help you build the skills necessary to create your own games.

Until next time.
Bye.

In this RTS game, you must help your troops get to the nearest castle while avoiding enemies, spells and lies.